The ESCs cooperate on many levels, both within the framework of the European Union (EU) and within the broader international framework, for the purpose of forming joint positions capable of influencing EU and national policies, as well as the activity of private actors in each country. Examples include the Greek ESC's close collaboration with the European ESC and the other national ESCs in the EU member states, its membership in the International Association of Economic and Social Councils and involvement in the EuroMediterranean Partnership, cooperation with the countries of South East Europe etc. 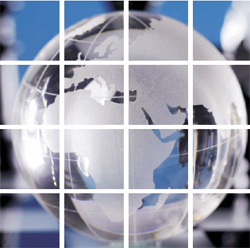 The International Association of Economic and Social Councils and Similar Institutions (AICESIS) held its first official meeting in July 1999 in Port Louis, Mauritius.
In its initial form the AICESIS had 24 full members and 3 associate members. The AICESIS currently comprises 71 institutions from African, Latin American, Asian and European countries.

The Association is fully respectful of the independence of each of its members. AICESIS has the following mission:

As a result of its systematic preparation, the ESC of Greece has been elected Member of the Board of Directors of the International Association of ESCs for the period 2009-2011. Its active participation contributed strongly to its reelection at the Board of Directors for the period 2011-2013. Currently, the ESC of Greece, with its position papers in the Working Groups (such as Environment, Global crisis and the role of civil society) and Committees (such as the Millennium Award) of the AICESIS, contributes creatively to the formulation of a policy of international acceptance.

The Union of Economic and Social Councils and Similar Institutions of Francophonie (UCESIF) is an international association of ESCs from French-Speaking Countries, which develop common action on a range of issues concerning their societies.

The ESC of Greece believes that communication and cooperation with relevant institutions in the world, and the signing of Memorandums of Understanding with ESCs from other continents, offer new opportunities for collaborations on a privileged basis for the country.
Relative initiatives have already been implemented and others are underway with ESCs from Asia, Africa and South America.

In the framework of the ESC’s International Relations the ESC of Greece welcomes in Athens delegations from all over the world.

In 1997 the ESC of Greece organized the Annual Meetings of the Presidents and the Secretaries General of the EU Economic and Social Councils. Since then, it has taken an active part, with interventions and proposals, in all the meetings, and has developed a very good level of cooperation with all the national ESCs.

The Euro-Mediterranean Partnership, as a multifaceted relationship, began to develop within the framework of the European Union, beginning at the 1994 European Council in Corfu. Before that, there had been cooperation agreements with countries of the Mediterranean basin, but they were on a bilateral level. One of the basic objectives of the ESC's Euro-Mediterranean Partnership is to promote decentralized action, i.e. the action of non-governmental agencies in planning programmes to be financed by the European Union.

In the context of this policy, it was decided to convoke the Barcelona Conference on 27-28 November 1995, with the participation of the Foreign Ministers of the EU and another 12 Mediterranean states: Egypt, Algeria, Jordan, Israel, Cyprus, Lebanon, Malta, Morocco, Palestine (referred to as “territories” in official texts), Syria, Turkey and Tunisia.

Cooperation with the Countries of South East Europe

One of the initiatives undertaken by the Greek ESC on the european level has been to hold meetings of the social partners from the countries of South East Europe. The first event was held in Thessaloniki in 1997. Following this, the ESC issued an own-initiative opinion on the subject of “Social Dialogue in South East Europe” (April 1999).

In January 2000, together with the European Economic and Social Committee and the Royaumont Process, the ESC organised a conference entitled “Civil Society, Democratisation, Participation and the Stability Pact for South Eastern Europe” in Thessaloniki. It was followed in September 2002 by the Final Meeting on the “Thessaloniki Process” Action Plan.

In December 2006 the ESC organized in Thessaloniki, together with the European Economic and Social Committee, a Conference of the institutions for social dialogue of South East Europe entitled “The Role of Economic and Social Councils and Similar Institutions in the EU Accession Process and the Implementation of the Lisbon Strategy.” The ESC has also developed a series of bilateral contacts with the countries of South East Europe.

In 2000, the European Economic and Social Committee and the national ESCs set the common goal of creating a central information point enabling the broader public to get to know them and their tasks better. The new Internet technology was considered to be the best tool for achieving this purpose. As a result, the need for broader cooperation between the European ESC and the national ESCs became apparent. Thus Project “CESlink” came into being.

The Project started with the creation of a working group of the European ESC and the national ESCs, which was later named the “CESlink Group.” This group meets at regular intervals and monitors, develops and expands the initiative.
In 2006 Dr. Martha Theodorou (ESC of Greece) was put in charge of the Communication Actions of the Project “CESlink”.

Future areas for development include strengthening the cooperation between the European ESC and the ESCs of the EU member states, encouraging and supporting the new EU member states and the members of the International Association of ESCs and similar institutions for their active participation in Project “CESlink,” strengthening the role of Project “CESlink” as a joint project of the ESCs, as well as monitoring and providing information on socioeconomic developments on the national and international levels.